Microsoft Teams, after several rumors, was finally unveiled at an event organized in New York yesterday afternoon and is in direct competition with Slack, the startup launched three years ago, and Facebook Workplace announced in early October. Who will win?

Microsoft Teams is a new work environment integrated into Office 365 that includes in a single platform all the productivity tools developed by the Redmond-based company. The objective is not new: to simplify internal communication between colleagues because work, by now, is increasingly in teams and, above all, in chat. It is what, by now in jargon, is defined software-as-a-service, that is a product to be used mostly online. Microsoft Teams is available for testing since last Wednesday, practically yesterday, in 181 countries and 18 languages and for everyone from the beginning of next year.

The reactions to Microsoft Teams - although perhaps it would be better to call them challenges - were not long in coming. Slack, in fact, has taken the trouble to buy a whole page of the New York Times to write a long letter to those of Redmond in which, in extreme synthesis, ironically welcomes the new competitor and informs him that "Dear Microsoft" ... "you may be big and fat, but you won't make it." A start with a bang, in short, and a lot of publicity for both. 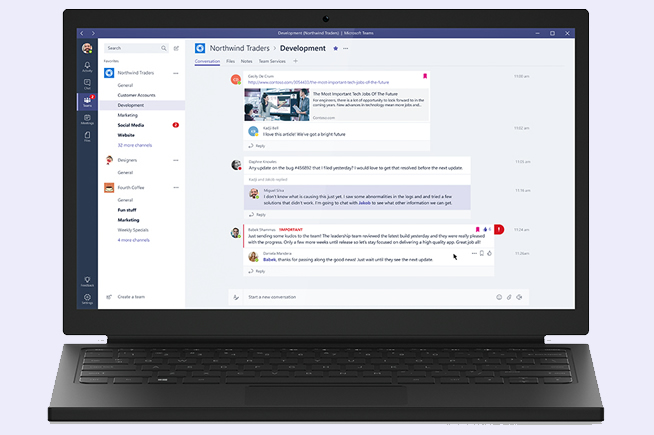 For many but not yet for all

Microsoft Teams is currently in preview, or trial, in 181 countries and 18 languages, for those who have a subscription to the Business Essentials, Business Premium and Enterprise editions of Office 365. The service will be available to all enterprise customers within the first three months of next year.

Some of the videos in this section have been taken from the Internet and are in the public domain. If the subjects present in these videos or the authors have something against the publication, it will be enough to make a removal request sending an email to: [email protected] We will provide to the cancellation of the video in the shortest time possible.