Samsung has announced the new mid-range Galaxy A9 2018, the company's first phone with four rear cameras, here's how it will look like and how much it costs

It had already been talked about for a few weeks, but now that the presentation of the device has taken place, it's all confirmed: the Samsung Galaxy A9 is the first smartphone in the world with as many as 4 rear cameras. A nice step forward for the South Korean manufacturer, which only for a couple of years had introduced the dual-camera system in its flagship devices. 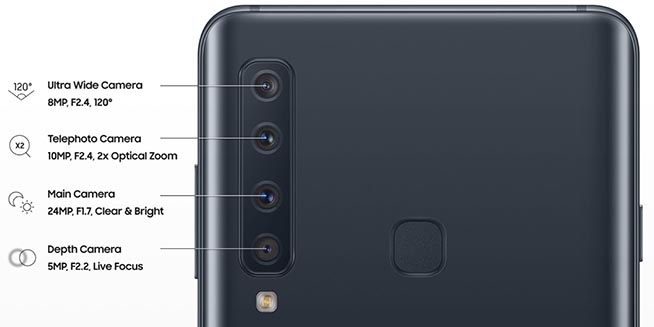 Stando alle prime informazioni emerse dall’evento di presentazione di Samsung, l’azienda sudcoreana avrebbe progettato un sistema con quattro diverse fotocamere ognuna con un compito ben preciso. Il sensore principale sarà da 24 megapixel, con un apertura focale 1.7 estremamente luminoso. Then we find a 5-megapixel depth of field lens that will allow you to take photos with bokeh effect (the blurred background, essential for photos in portrait mode). The third sensor is 10 megapixels with the ability to perform 2X optical zoom. Finally we have a fourth 8-megapixel wide-angle sensor with 120° viewing angle. If we talk about the variety of sensors this is one of the photographic compartments with more functions and complete in general among all the smartphones now on the market.

As said, on paper the Samsung Galaxy A9 is the smartphone with the most complete photographic department on the mobile market, attention complete not in terms of quality of the shots taken but according to the different functions that a user can use with this system of four sensors. The cameras of the Galaxy A9 are arranged vertically and supported by an LED Flash. Think, for example, that thanks to the different sensors, Samsung's new mid-range has 19 image enhancement modes. Each mode offers custom settings for food, landscapes, portraits, plants, night scenes and more. The phone also detects when a subject is blurry, which will automatically prevent you from taking bad quality photos&nbsp.

The Galaxy A9 has a 6.3-inch SUPER AMOLED screen with a resolution of 2,220 x 1,080 and an 18: 9 aspect ratio. It has a side-mounted fingerprint sensor and a 3.5mm headphone jack. On board we find Qualcomm's Snapdragon 660 octa-core processor. Two RAM options of 6 or 8GB. While they are 128 GB of internal memory standard expandable however via microSD up to 512GB. The battery is 3,800 mAh with fast charging. The phone will not come to the market with Android 9 Pie but with Android 8.1 Oreo.

Samsung Galaxy A9: price and availability

The new mid-range of Samsung will come to the market from mid-November 2018 in the colors Caviar Black, Lemonade Blue and Bubblegum Pink. In Europe, the Gaalxy A9 2018 will cost 599 euros.